On a mid-February day, Susan Willsrud, co-director and farm manager of the 30-acre Calypso Farm and Ecology Center in Fairbanks, Alaska, sits in her sun-filled textile workroom. Behind her are work tables, the tools of her trade, and diamond-shaped cubbies filled with brightly 32 dyed yarn that she’s spun by hand.

As she moves her laptop camera around the room to give me a tour, I catch a glimpse of the Shetland sheep that have provided her wool, grazing peacefully outside her window. We’re on a pandemic-era video call, naturally, and although the sun is nearly at its zenith, the light is thin and wintry, the trees bare. In a state where the shortest day of the year is only four hours long, Willsrud revels in the season’s lengthening days: “Seven more minutes of daylight every day” she tells me exultingly. 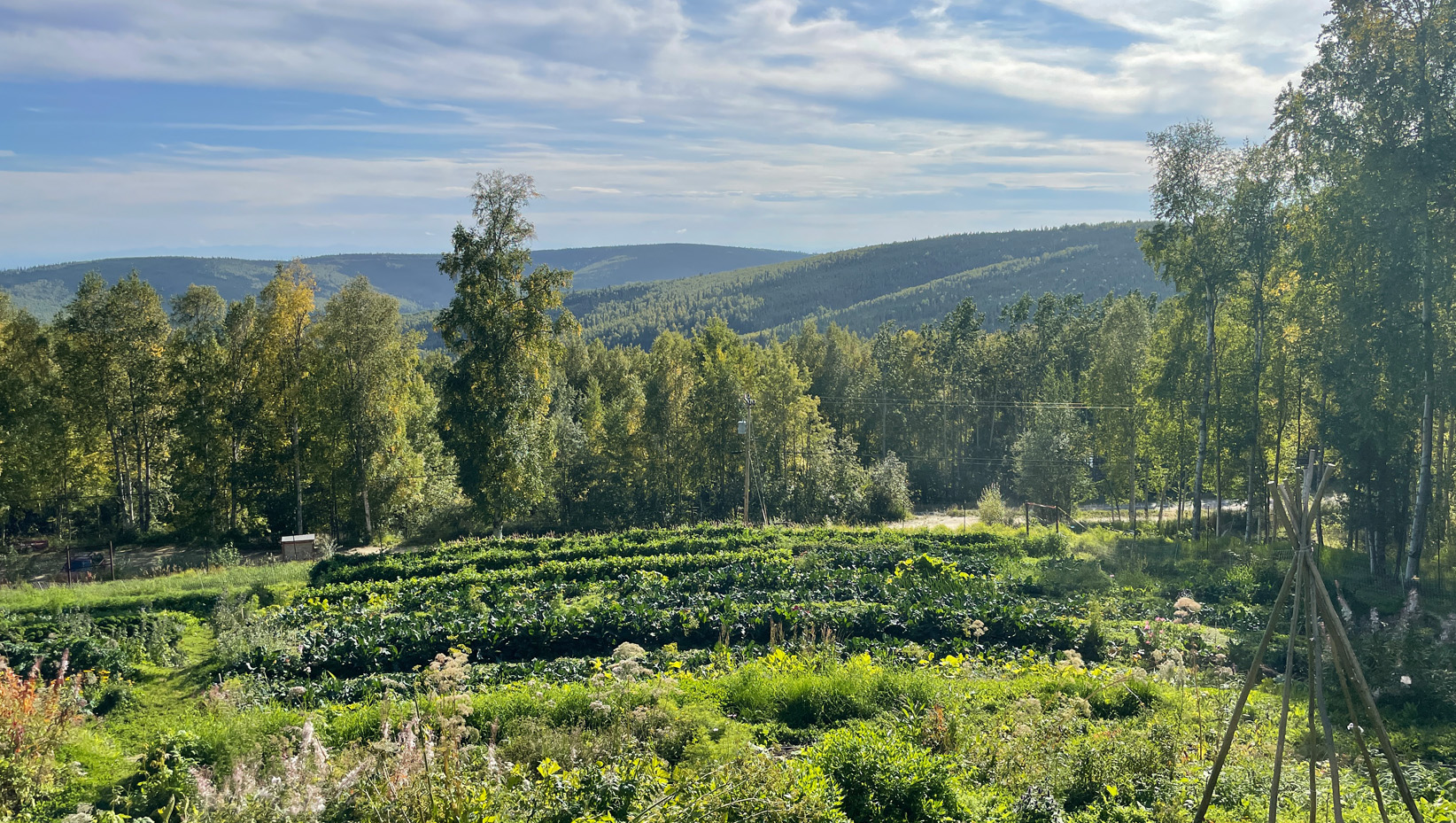 Along with her husband, Tom Zimmer, Willsrud established Calypso in 2000. They made it a nonprofit so that they could devote equal time to hands-on education as well as farming. In over two decades of operation, they’ve developed a dizzying range of products and services: close to 500 different varieties of vegetables, herbs, and flowers to promote diversity and resilience; farmer and community garden leader training programs; elementary school farm classes, and curriculum materials. All serve their goal of promoting food justice and food sovereignty, and their efforts have made them a trusted member of the Fairbanks food system.

During their time here Willsrud and Zimmer have established a comforting rhythm. They stretch their three-acre production farm’s growing season from mid-March to early October with the aid of a seed-starting house, two greenhouses, and the farm’s ideal location in the circumpolar northern boreal forest –1,400 feet above sea level on a south-facing slope overlooking the Tanana Valley. Unlike north-facing slopes and low-lying areas, Calypso does not have to contend with permafrost, allowing them to begin farming a month earlier than most.

“We never have a sense of burnout, and the arrival of every spring is exciting.” “One of the most notable things about this location is that it’s really impacted by slope and aspect,” Willsrud explains. “Even from a great distance, you can tell where there’s a dip that gives the land more light exposure. You’ll see different tree species on the south face and you can watch the tree composition change in a matter of footsteps.” While most of Fairbanks is in deep frost by September, she notes, Calypso can extend the season by weeks: “We’re really taking advantage of the microclimate.” Root cellar storage allows the farmers to provide for the local soup kitchen all winter, while they devote their energies to farm planning for the coming season. It’s also the time to work on value-added products: wool spinning and designing knitting patterns for Willsrud, and for Zimmer, an iron workshop and livestock care. In addition to 16 sheep, the farm’s five acres of rotationally grazed pastures are home to several dairy goats, chickens, and bees. “In this kind of deep winter, we can really take a breath,” says Willsrud. “We never have a sense of burnout, and the arrival of every spring is exciting.” The farm maintains a year-round staff of five, including Willsrud and Zimmer, and brings on as many as 20 more part-time workers during the peak growing season. 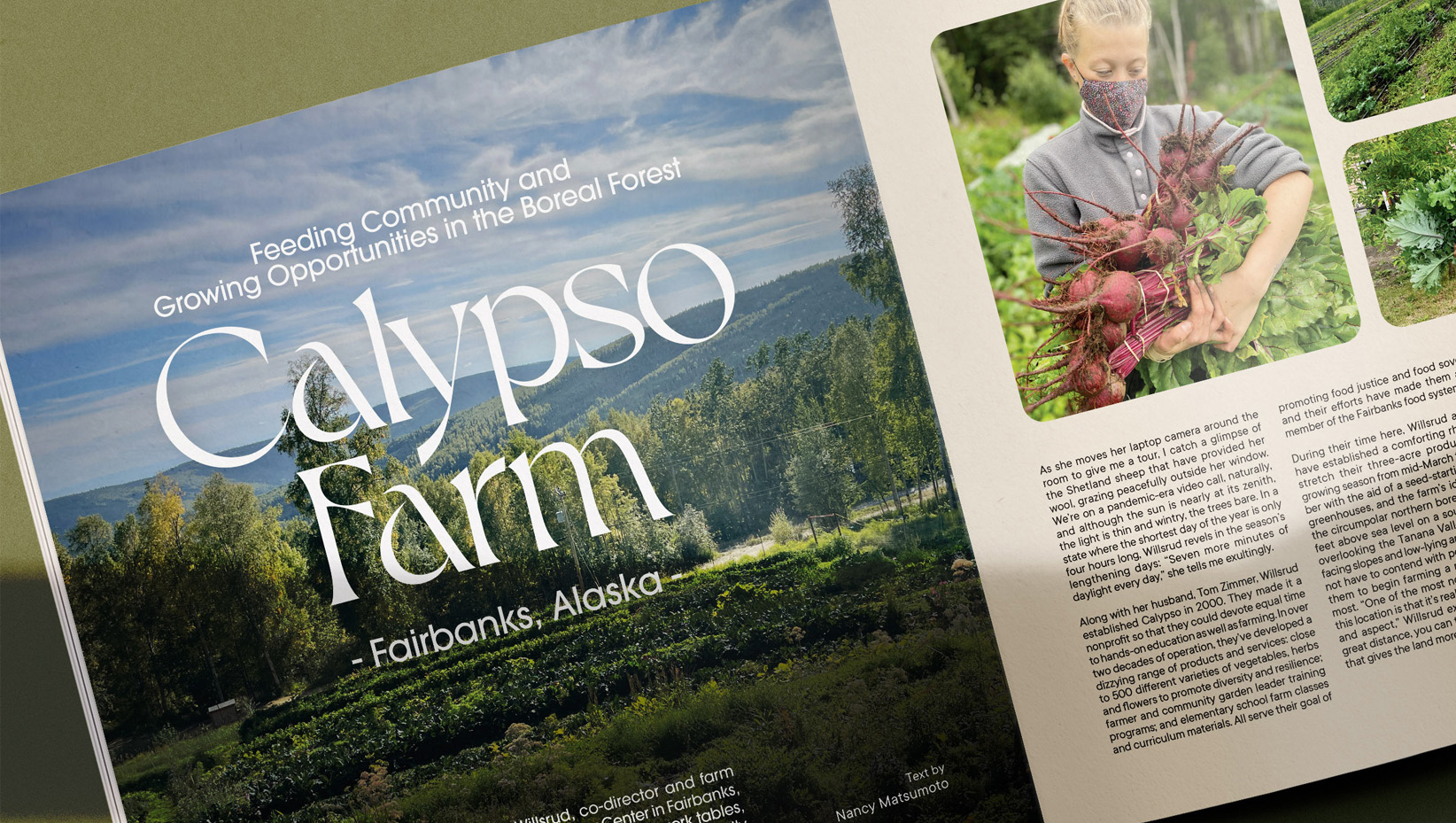 In the spring they’ll revive their three-quarter-acre seed field with a view toward increasing resilience and preserving open-pollinated seed stock, including a number of indigenous varieties. Willsrud and Zimmer met in 1988 in Isle Royale National Park in Michigan, where she was volunteering for a wolf and moose study and he was on a backpacking trip. They kept in touch, and reunited in 1992 after Zimmer returned from three years with the Peace Corps in West Africa. They headed to Fairbanks in 1994, where Willsrud earned her master’s degree in plant ecology at the University of Alaska and Zimmer—who holds degrees in geological engineering and soil science—conducted field surveys for an  environmental consulting company. “We both cared a lot about community, were interested in growing food, and we didn’t want to pursue a traditional academic career,” says Willsrud. Starting Calypso (which is named for a magical, lone Calypso bulbosa (fairy slipper) orchid Willsrud spied while doing field work in the area) was a project “where all the pieces came together.”