Regenerative Farming is the Revolution

Preparing to interview Dr. Vandana Shiva is no small task. The author of 31 books, the 68-year-old quantum theorist turned environmentalist and activist is one of the most impactful leaders in the international movements for food sovereignty and justice. For us at Growers & Co., her crusades against globalization and industrial agriculture have been a long-standing source of inspiration, so having the opportunity to speak with this passionate, eloquent and awe-inspiring being was a real honor.

After obtaining a Ph.D. from the University of Western Ontario in 1978, Dr. Shiva became involved in the Chipko movement, a grassroots women’s initiative that succeeded in stopping commercial logging in the Indian Himalayas. In 1982, she established the Research Foundation for Science, Technology, and Ecology in her hometown, Dehradun, India, to promote sustainable agriculture and combat water privatization, factory farming and genetic engineering. In 1991, she founded Navdanya (meaning “new gift” and “nine seeds” in Hindi), a research farm and education center aimed at protecting the diversity and integrity of living resources, especially seeds. In the late nineties, Dr. Shiva initiated the international movement Diverse Women for Diversity, which upholds the role of women as seed conservators and experts in the use of medicinal plants.

To this day, Dr. Shiva’s campaigns are instrumental in challenging corporate-driven agricultural practices and attitudes about food. Her numerous publications alert people around the world to the threats of industrialized farming to all species—especially ours. Her inspirational work pushes us toward a food democracy rooted in the agro-ecological understanding of interconnection. In this interview, we discuss the importance, practices and benefits of small-scale, regenerative agriculture.

JM: Our mission at Growers & Co. is to celebrate the movement of small-scale regenerative agriculture. To better understand why this movement is so important, could you explain the relationship between globalization, privatization of the commons, and industrial agriculture?

Vandana: Well, globalization, enclosure of the commons, and industrial agriculture are actually what colonialism was. It has reemerged as recolonization in the name of “free trade.” Free trade in agriculture means freedom for agribusiness corporations to control every aspect of agriculture everywhere in the world, from patenting seeds and creating seed monopolies, to imposing systems of industrial agriculture, systems of industrial processing, and systems of deregulated trade for global corporations, all while destroying small farms and local food economies. This is led by international agencies like the World Trade Organization (WTO), the General Agreement on Tariffs and Trade (GATT), the North American Free Trade Agreement (NAFTA), the Central America-Dominican Republic Free Trade Agreement (CAFTA-DR), to name a few.

What is globalization? It’s the global reach of an empire. What is privatization? It’s the enclosing of the commons—for example, making shared things, like land or water, exclusive to only those with access, which is typically tied to privilege. The commons by its very name means what is common, and if you look at the fact that exactly at the same time that colonialism was globalizing the economy, it was also enclosing the commons in England. They go hand in hand. We’ve been trained to think in silos. People who fight for the commons think it happened in England only. Everyone splits it into their little portion of how history impacted them, and that too is under distorted interpretation.

Before globalization, all farms were managed ecologically on a small-scale. Today, industrial agriculture is different: first, you stop growing what you need and start growing raw materials. That’s called a plantation economy. This began with colonialism when cotton was produced by enslaved peoples on stolen land, and it is still the case today as genetically modified soy is grown for biofuel, animal feed and processed food.

Second, due to its large scale, it is typically dependent on fossil fuels and chemicals. If I’m working on a two-acre diversified farm, I believe there are no weeds because I see everything as useful; I don’t have to spray Roundup (a common agricultural pesticide that contains the harmful chemical agent glyphosate) because the biodiversity can work synergistically to support the health of the farm.

But when I have a 100,000-acre monoculture farm—meaning a farm that grows only one crop-then Roundup becomes an imperative. So all these things go hand in hand. It began with colonialism 500 years ago, but the patterns continue.

JM: Can you tell us about your connection to the regenerative farming movement?

Vandana: The organization Regeneration International was started as a movement by four of us: me; Ronnie Cummins of the Organic Consumers Association; Andre Leu, President of the International Federation of Organic Agriculture Movements (IFOAM); and Hans Herren, the former chair of the International Assessment of Agricultural Knowledge, Science and Technology for Development (IAASTD). We laid out regeneration as ecological agriculture, as chemical-free organic agriculture. Why was the need felt? Because in America, organic was badly attacked by corporate manipulation of the government-controlled organic standards. These companies wanted to create a new vocabulary so that they could keep doing the same old thing, while misleading the public to think that their efforts would offer long-term environmental benefit. 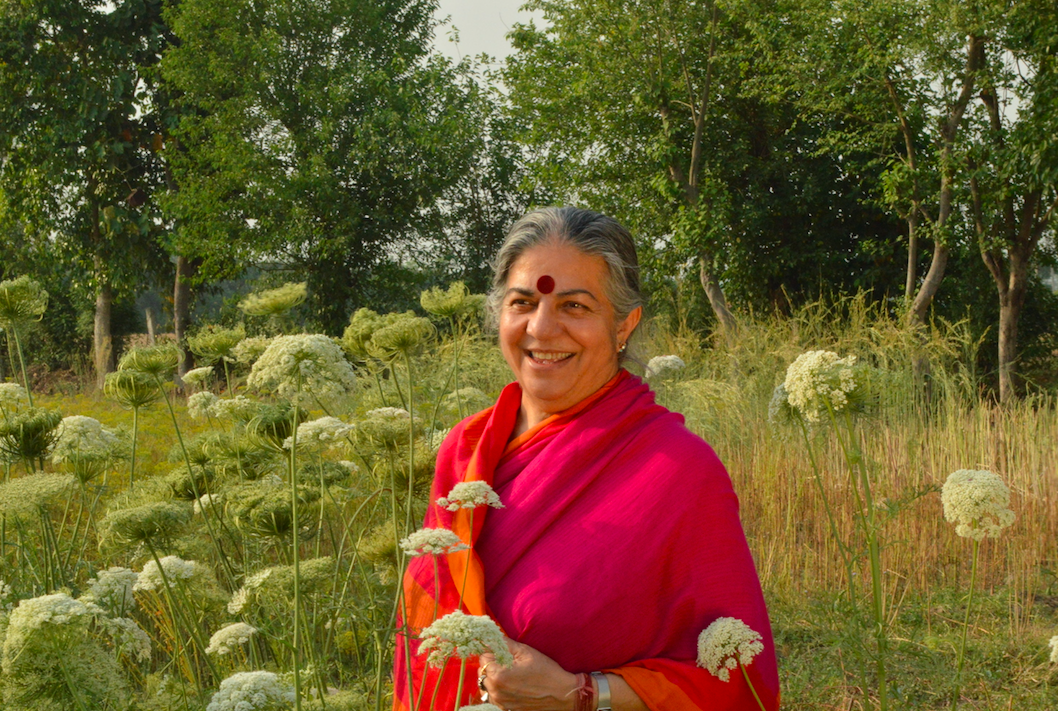 JM: Some so-called experts are promoting the use of Roundup in regenerative agriculture. What’s this about?

Vandana: Regenerative agriculture is about regenerating the planet. As far as I’m concerned, Roundup has no place in it. Corporations appropriated the term “organic.” They appropriate every word we create because they’re very threatened by organic, but they’ll never appropriate the system. Organic is a system of science; it’s a system of distribution. So the appropriation of regeneration should not become a rejection of that term. We should deepen it so that we can constantly push Roundup out of the system, and say, “this is not regeneration. This is not organic.”

Kory: So you’re saying that we need to fight back by reclaiming the word and make sure that industrial-scale food corporations are not simply using a loosely defined word?

Vandana: Yes. I am writing a dictionary of co-opted terms, including “organic,” “natural” and “sustainable.” If we were to give up every word that they hijack, we would have no words left to speak. We’ve got to reclaim them.