Valhalla Farms: To Plant a Tree and Build a Community

Take one glance at Marc Angelo Coppola’s prolific social media presence, and you’ll realize he’s not your typical farmer. His videos typically show him speaking into a headset microphone about topics ranging from NFTs to agriculture. At first glance, you might mistake the 33-year-old for a Joe Rogan-type podcaster rather than someone who takes deep pleasure in growing garlic. Marc splits his 80-hour work week between Montreal and Valhalla Farms, the 88-acre community farming project he founded on the outskirts of the city.

When I reach Marc over Zoom one winter after- noon, the young farmer and digital entrepreneur is sitting at a desk in his exposed-brick Old Montreal apartment. He’s wearing the familiar headset I recognize from countless Instagram videos. Excited, he quickly jumps into an explanation of his lifestyle, painting a portrait of himself as a man with one foot deeply planted in the dirt, and the other standing firmly on the pavement of a bustling city. It’s precisely this duality that allows Marc to explore a new approach to farming, one that exists somewhere between the city and the country and relies on social media to grow the roots of a community. Growing up in suburbia, neither urban nor rural, Marc was seldom exposed to any kind of agriculture. He came to farming later, as an entrepreneur. When he was only 18 years old, he invested in his first business, an indoor skatepark, which he operated while completing a degree in marketing and entrepreneurship at McGill University. 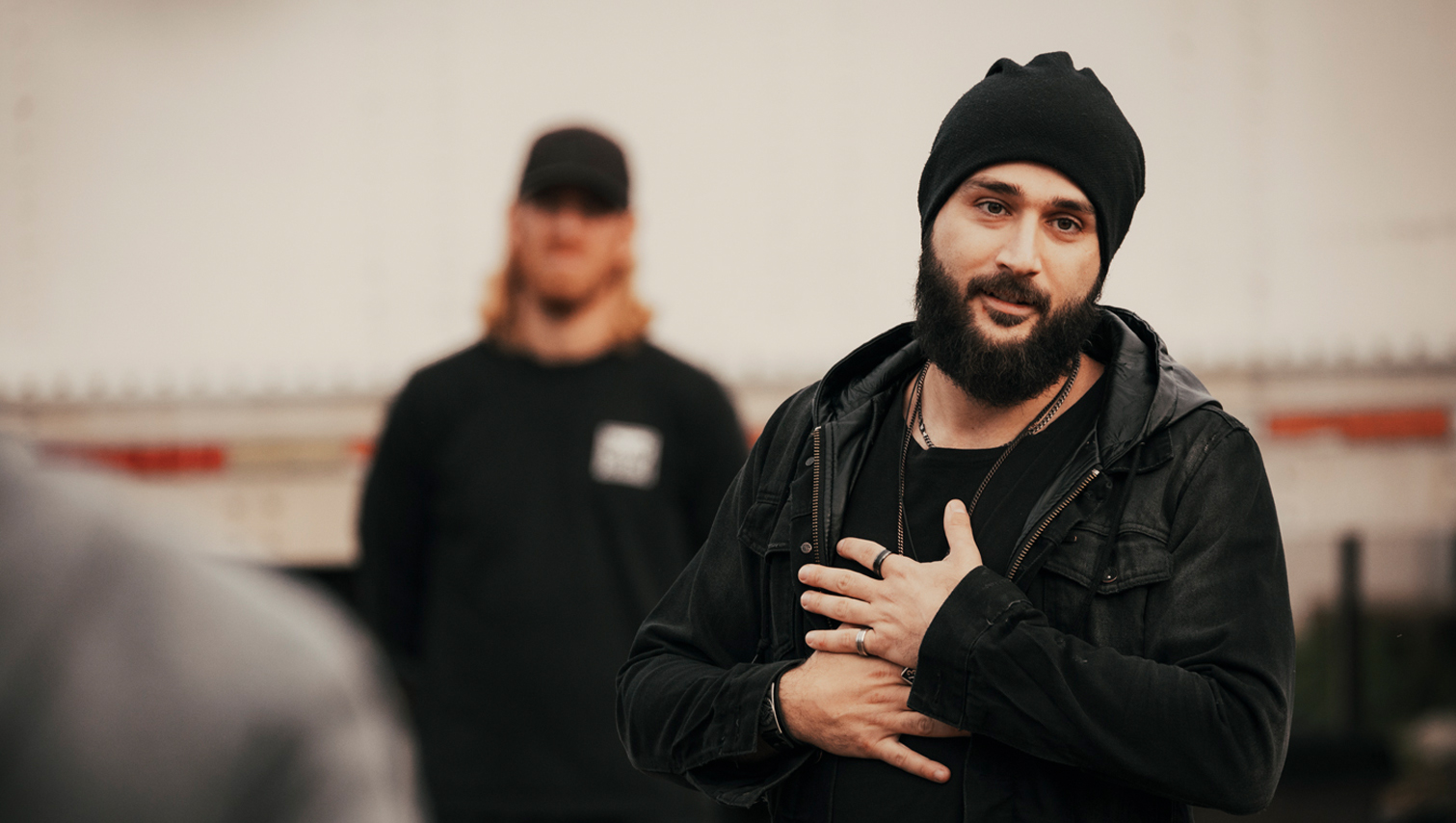 Having his own business allowed him to pool knowledge from his personal experiences, and it also made him doubt what he was learning in school. “I felt like it was all theory and none of it was helping me in the real world,” says Marc. To expand his horizons while finishing his degree, he challenged himself to watch one documentary a week for an entire year. During that experiment, Marc realized that while many documentaries did a great job at exposing issues like climate change, exploitation, and violence, they often failed to explore actionable solutions. That’s when everything shifted for him. 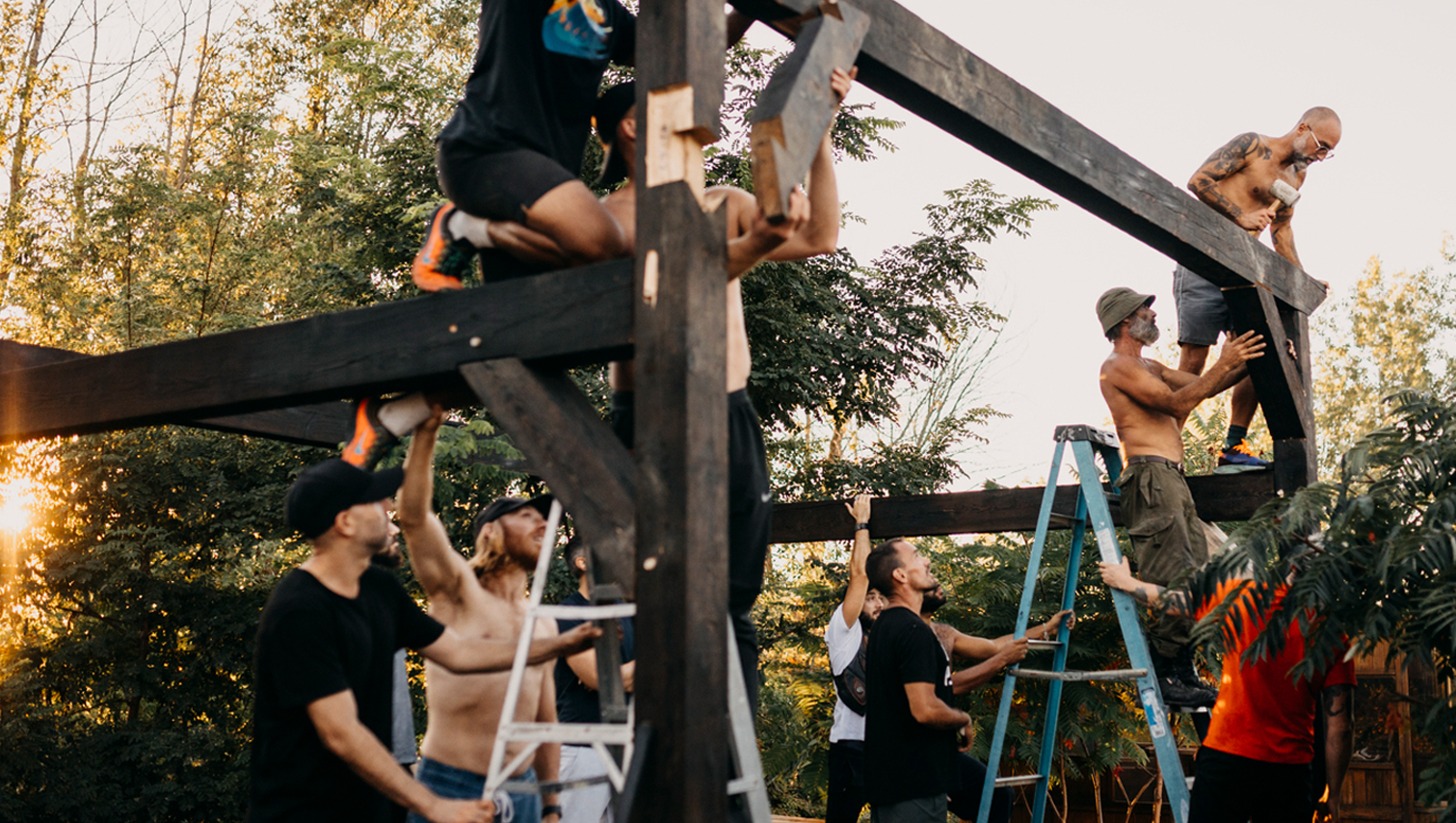 By the time Marc graduated, he had sold his skatepark business for a profit and launched two media agencies. And then, one day in April 2012, he visited a plot of land that was up for sale, just 20 minutes outside of down- town Montreal. It was there that he found his new path. “I walked out in the middle of this flat field that had been growing GMO corn and soja for generations. Nothing was growing anymore,” Marc tells me. He realized that he needed to revitalize the land: “I decided that I was going to plant a tree and build a community.” And just like that, Valhalla Farms was born. Marc was only 23 years old when he and his friends moved out of their parents’ basements and into a house near the farm to start realizing their dream.

Marc was becoming more and more interested in video content creation and photography and began documenting his journey at the farm on social media. Little by little, the Valhalla community that Marc dreamed of creating started to grow, alongside his social media following. 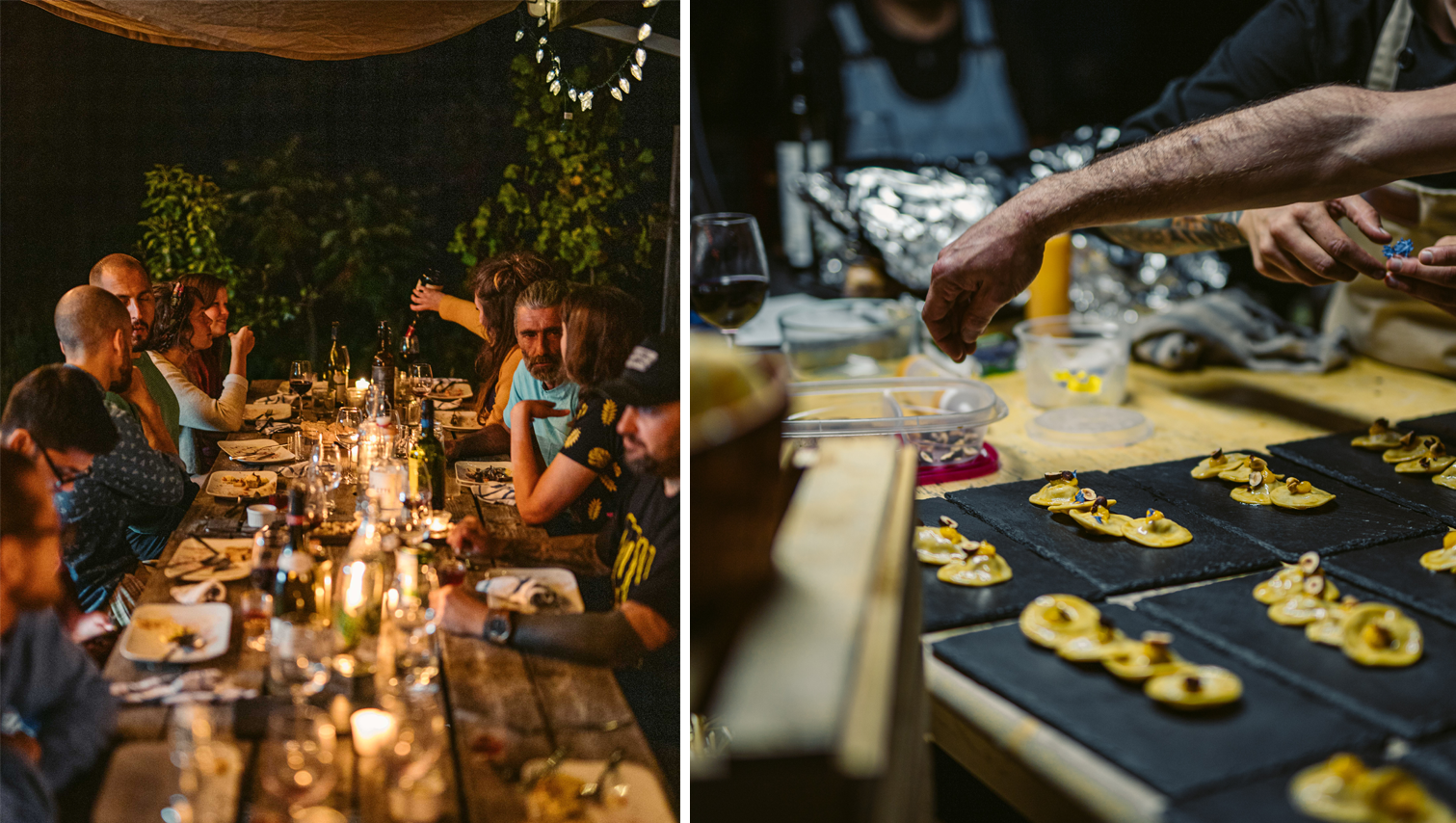 The first year on the farm proved to be a lot more challenging than Marc ever expected. He had never farmed before. He didn’t have any mentors. He had never taken a course on farming. Plus, he was still working 40 hours a week in the city at his agencies. He felt lost, but was somewhat comforted by the knowledge that he wasn’t alone. With more people than ever watching his videos and wanting to work with him, Marc soon surrounded himself with those who knew more about farming than he did. This helped him tremendously when it came time to plant hundreds of lavender and berry bushes. Unfortunately, their combined knowledge didn’t stand a chance against the flood that besieged the farm that first year—an incident owing partly to the property’s lackluster drainage system. Only a few of the berry and lavender bushes Marc and his friends planted that year survived. But the team didn’t give up. They put their heads down and continued to work toward their goal of restoring life to a field that had been damaged by years of monoculture and heavy chemical and pesticide use.

In order to revive the land and grow the community he wanted, Marc started studying and applying the principles of permaculture. For him, this means planting crops in a way that observes the land’s natural ecosystems and encourages biodiversity. The team started a nursery of berry bushes and fruit trees, including cherry, apple, pear, and plum, and they planted garlic, lettuce, tomatoes, and plenty of other vegetables. They also installed beehives and started raising chickens on the property. Slowly, the soil and the land started to come back to life. 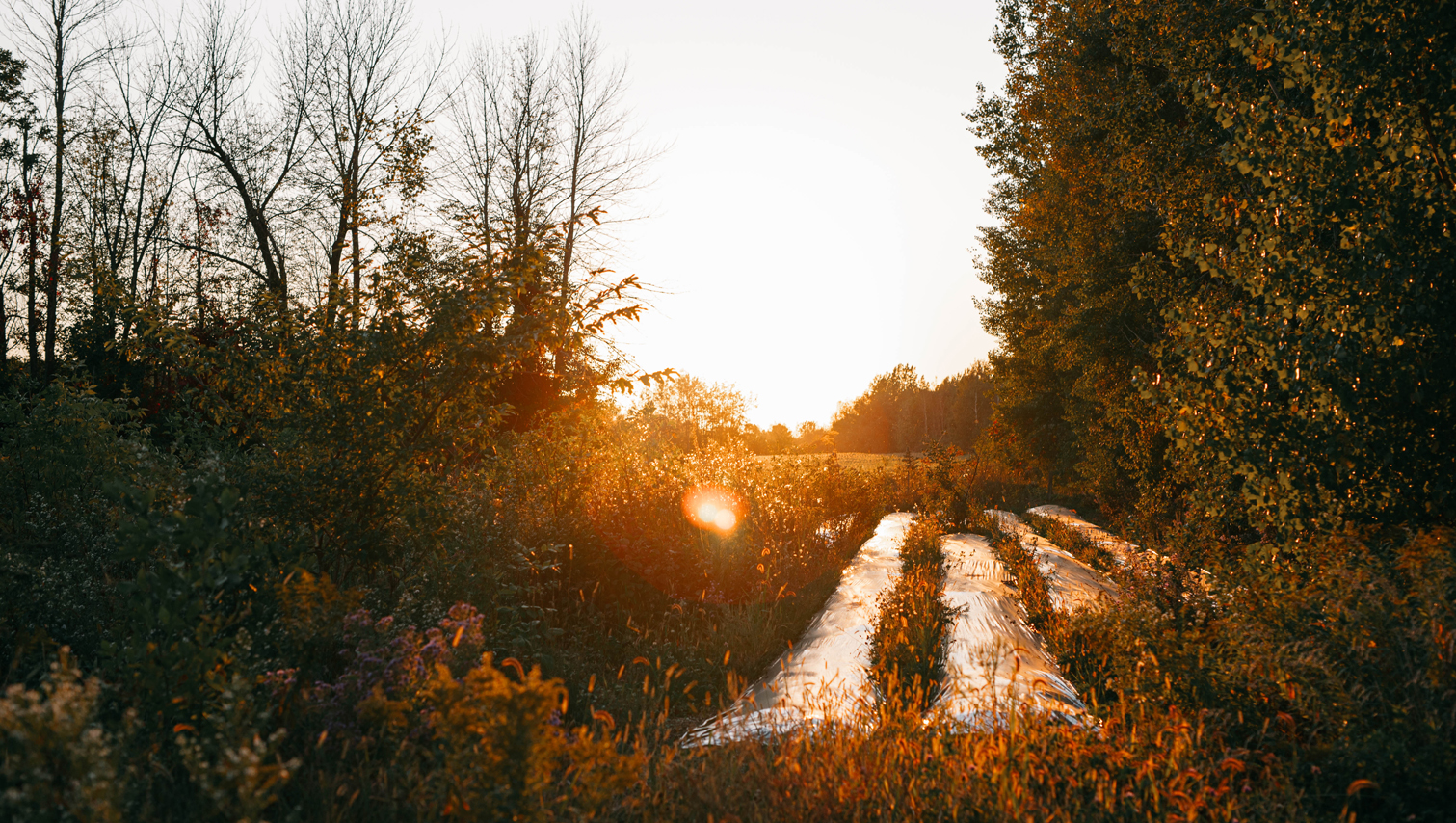 The community got to work building structures, including an earthship (a type of sustainable home made using recycled and natural building materials), greenhouses, and a tool shed equipped with solar panels. After they created a few ponds, bat colonies started to flock to Valhalla to feed on mosquitoes. Deer trotted around and garden snakes slid their way through the garden beds. Now in its 10th year, Valhalla operates as a co-op. “It’s a community of people who are coming together to be growers, producers, members and supporters,” explains Marc. Valhalla’s co-op structure allows individuals and businesses to band together and share in the ownership and success of the farm while various experts take charge of the daily and big picture operations of the farm.

According to Marc, most farmers have to maximize their production in order to survive and make a profit. With the co-op model, Marc hopes to build financial stability through memberships and focus on community instead of production. “Financial sustainability can come from membership dues from people who just want to come see what we do and have a smile.” Some of Valhalla’s members are workers who contribute manual labor to the farm. Others are producers, meaning they are experts, farmers, or farming-related organizations who operate their own businesses on the farm. Other members are considered supporters, meaning they don’t directly work on the farm, but they invest time, energy, and resources to support Valhalla’s vision. Members can also serve on the board, managing the co-op and taking care to make it as efficient, welcoming, and supportive as possible for everyone.

Join Marc’s mission and become part of the community here.